Most Accurate Cinematic Performance of a Delconian 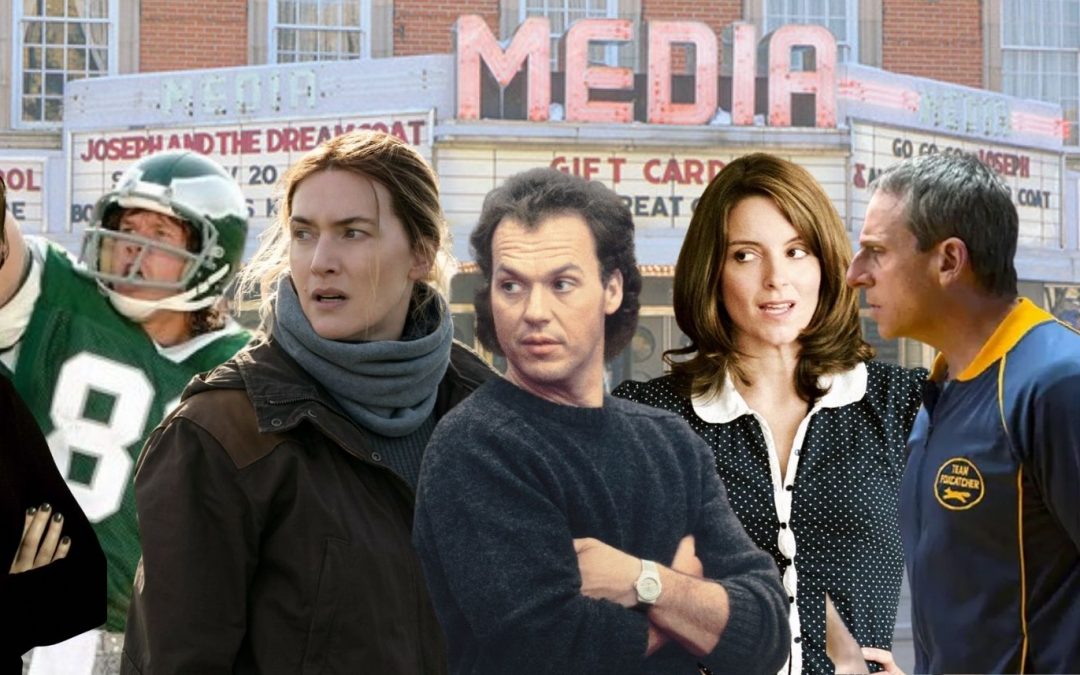 Most Accurate Cinematic Performance of a Delconian Rapid Fire Bracket. Tune In, Call In, make your arguments in the comments on May 11th at 9:30 PM here.

Not necessarily which ones have ties to Delco, or which one had the most success. The character involved must be a Delconian. The rubric is which one performed the most accurate portrayal of a Delconian in their given role. Limited to two entrants per piece of film/tv.

Kate Winslet as Mare Sheehan in “Mare of Easttown” – Newest entrant on this list, this Best Actress Award winner, who has starred in blockbusters for 20 years + and classically trained performer, uses her in-depth work ethic, to learn the over-pronounced dialect of the area. Her character peaked in high school, never left the area, and currently has a mundane job cleaning up the messes of the townsfolk. Frequently and casually drinking whiskey and Rolling Rock, while dealing with relationship and baby mama drama, and scarfing down Cocco’s cheesesteaks and LaSpadas hoooeeegies

Lindsay Lohan as Cady Heron in “Mean Girls” – Based off Upper Darby High School, and written by Delco Native and Queen of the County, Tina Fey, Lohan’s character gets a culture shock when she goes from being homeschooled around the globe, to the harsh realities of high schools in the 610. From house parties to learning what Halloween costumes and Christmas outfits in this area, all while juggling the clique politics that can drive the teenage experience in Southeastern, PA. Couple this with Lohan’s actual legal woes, and you have a force to be reckoned with in this tournament

Mark Wahlberg as Vince Papale in “Invincible” – At the beginning cusp of his true breakout era of his career, Wahlberg plays Glenolden Native, and Interboro Alumni, Vince Papale, during his venture to walk on the Philadelphia Iggles, being one of the very few Delconians to pursuit their dreams. While the movie doesn’t necessarily pay the due homage to Delco as it should, Walberg’s performance and overall Delco-ness of Papale himself cannot be missed

Amy Poehler as June George in “Mean Girls” – You may say, why her as the second entrant, and not one of the actual Mean Girls, or Tina Fey. Fey played a principle in this film, it is not her most Delconian work. The mean girls were interchangeable to any story. Poehler’s portrayal of the “cool Mom” who let the kids do whatever, while imposing the bare minimum of supervision just to keep up the social rankings of herself and her daughter, may not be totally unique to Delco, but there was just something about her performance that hit home and left most County residents going “Oh, man, she’s exactly like [insert former classmates] Mom”

Bradley Cooper as Pat Solitano, Jr in “Silver Linings Playbook” – Cooper portrays a divorced, mentally ill, manic, former teacher, who is fired for assaulting another teacher at the front door of Prendie. The Solitano family lives in Upper Darby, which is also Ridley Park in different scenes, the continuity is a little off sometimes. The father is a bookie, and they are over-the-top Iggles fans. Solitano still hangs out with a select group of high school friends, that “listen to Megadeth and break shit in the garage”. The character is unhinged, yet hopeful, and just wants happiness. Cooper was nominated for Best Actor for this role, and Robert De Niro as his father was nominated for Best Supporting actor. De Niro would have been in this bracket if we didn’t limit it to two per work

Evan Peters as Colin Zabel in “Mare of Easttown” – Heartthrob from ‘American Horror Story’ fame, Peters took the less traditional, but mega-Delco approach of learning the local accent, by just simply hanging out at Dolan’s Bar, and listening to shenanigans of the local bar scene. His counterpart Kate Winslet had a full dialect coach… Peters had Ridley Parks finest patrons yelling about Phillies games. The Zabel character in a recent episode stated he was “Ridley Raider, Class of ‘Ooooo5” in a cringe-worthy, yet somewhat satisfying tone.

Most Accurate Cinematic Performance of a Delconian Continued

Michael Keaton as Daryl Poynter in “Clean & Sober” – Filmed partially in Darby, Keaton plays a self-destructive cocaine addict, that after having a one night stand overdose and die while partying with him, is sent to a 12 step program, and must find a way to get clean… and remain clean… in a struggle all too real to this area. Being released in the same 12 months that ‘Beetlejuice’ and ‘Batman’, Keaton’s performance gets lost in the midst of those game-changing epics, however, the Delconess is really felt in this hidden gem.

Tina Fey as Denise McDonough on SNL – Why this performance out of all of her work? This is the infamous segment on ‘Saturday Night Live’ during a Weekend Update skit, where Fey and Jimmy Fallon are Clifton Heights residents talking about “Hoagies” really putting the ooover the tawp Delco accent on the map. Frequently in roles, she will portray a Philadelphian or New Yorker, and in Mean Girls, her character didn’t out Delco the two chosen. This segment is peak Delco. Fallon and Fey basically perfect the role of Those Aunts You Just Don’t Wanna Invite to BBQ’s Anymore

Jennifer Aniston as Jennifer Grogan in “Marley & Me” – Spoiler Alert: the movie is about a dog dying, and should never have been made. It will ruin your day. Aniston’s character, her husband, and their dog live in Chadds Ford (I know, I know, Delaware County, not Delco), and get into some hijinx intended to be around Delco-ish. Aniston gets a nod as well, as she spent time growing up in Eddystone. She is the greatest success story in E-Rock history

Steve Carell as John du Pont in “Foxcatcher” – Michael Scott throws turns in his ‘Office’ pranks for this dark role, as he garnered a Best Actor nomination from the Academy, for his portrayal as murderer John DuPont, and his actions on his Newtown Square farm, Foxcatcher Estate. Doing an excellent, and creepy job as a member of the du Pont family, he would have fit in well at Satanville if need be.

Troian Bellisario as Spencer Hastings in “Pretty Little Liars” – Look, the town is based on a hybrid of Rosemont and Swarthmore, and the characters are pretty spot on to the stereotypes associated (in the mindsets of staunch Delconians). The character of Hastings is a know-it-all perfectionist, caught up in the drama, caught frequently lying, and is also a speed freak. She is a self-destructive, wet blanket that can sometimes ruin a party, while her own vices are worse than whats she’s preaching about. How many Friday nights around here have ended with a character fitting that mold?

Jamie Kennedy as Whitey in “Last Call” – I don’t even know if this counts as acting… Upper Darby native Jamie Kennedy portrays an Upper Darby native… look at that range. While he could have just talked and sounded like a Delconian, he goes to the next level with the accent. His portrayal of a degenerate middle-aged bar rat and party animal does hit right in the cockles of the heart. Basically living at a dive bar, only leaving to frequent the “shore” (Delaware River?), his antics are spot on with a unique type of individual you will meet within your first 36 of visiting the County.

Marc Singer as John Cappelletti in “Something for Joey” – Emmy Nominated, this movie tells the heartbreaking but beautiful story of Upper Darbys to own, and St. Lawrence, and Monsignor Bonner alumni, John Cappelletti, during his Heisman Award-winning tenure at Penn State, and the inspiration his little brother who was battling leukemia gave him. Singers performance, especially in the climax of the film, where he gives his Heisman speech, will tug at the heartstrings and is one of the few appearances that paints Delco natives in a positive light to the outside world

Kristen Stewart as Joan Jett in “The Runaways” – Stewart locks in the roll as Main Line born, Lansdowne raised (depending on the Wikipedia page at any given time) Joan Jett, in Jett’s first endeavor in the music scene as a member of The Runaways. While technically portraying a Delconian, that is never directly referenced in the movie, and the words “wooder” and “hoagie” are never mentioned as well.

Taryn Manning as Ali in “Last Call” – I’ll say it, we’re all thinking it… she’s Delco Hot. Pennsyltucky for ‘Orange is the New Black’ moves to the sharp South East Part of the State for her role as the object of main character Jeremy Piven’s eye. In this role, Manning (originally from Virginia) goes through about 4 different types of accents trying to get the Delco one down patent, with mixed results, as there are scenes where I think they may have literally overdubbed her lines.

She is in her 40’s and still lives with her mother, like most other characters, in the same area they grew up in. Her family is over the top Greek, which is a real thing around here. She accuses Jeremy Piven’s character of selling out Delco because he moved away… all the way to Rittenhouse Square, a whopping 1.5 miles away. While the plot can be confusing, Mannings’s character is a spot on for someone you would see on a side street of 69th Street.