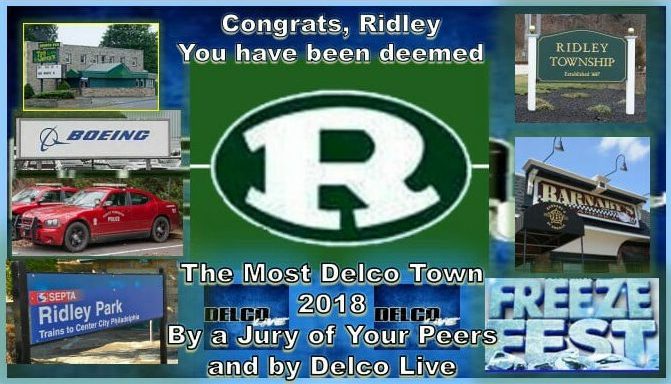 The Most Delco Town tournament began with 64 neighborhoods, towns, communities, and one somewhat fictional location, Midgitville, which I guess technically would fall under Ridley. From the initial matchup to this moment, over 800,000 votes were cast, families were divided, rivalries were renewed, friends were betrayed, and marriages were questioned. Delco is a mindset, a way of life, not just borders… even though for the last 2 and a half weeks we have exploited said borders. This brought out the best of a lot of people, and towns within the whole county, sharing stories of how their town, their stores, their drinking establishments, their local crackheads, best exemplifies the concept of “Delco.” Heroes were made with their enthusiasm, passion, grit, and determination to earn respect as Delco. Cinderella stories like Aston, Eddystone, Folcroft, Norwood, all proclaimed “We can run with the Delco big dogs.” I think we can unify over the fact that the main line was swept out of this tournament in Round One. If you don’t want to be Delco… this trophy isn’t for you to begin with.

Glenolden, you fought a fight of fights. You channeled the spirit of your resident, “Invincable” Vince Papale, and never gave up the dream of being labeled most Delco, and you got to play in the big game. If the MacDade Mall could see you right now, it would be extremely proud. Like Briarcliff being an entire community made up of the same brick row home, you were consistent in your journey. You may be down right now, but your town will raise from the ashes, much like Dino’s Bar & Grille did after its fire. (That 39 North now). From this battle, Delco will honk with respect everytime it goes through the Knowles Ave Beep Beep Bridge.

That brings us to Ridley. A journey that began 63 towns ago, you whisked away your small, but mighty neighbors of Rutledge in Round 1. In Round 2, you faced Marple, a dry town… that was soaked in tears of defeat. You then went on to face beloved underdogs, Aston, and sent them back down south. In the Elite 8, otherwise known as the 6-1-Ocho, you fought and won the Battle of the Barnaby’s, sending home Havertown. You partook in one of the closest fights we’ve ever seen, and defeated Clifton Heights by a margin of 0.6%. In true Delco fashion, it left basically a renewal of an Interboro/Ridley rivalry for all ages as you were pitted against Glenolden, in a Battle of the Boulevard. Lines were drawn in the pothole filled streets, and the voting began.

This town is home to several Delco institutions, such as Tom & Jerrys and their delicious roast beef, Barnabys, Ricks, and Appelbees, home of half priced appetizers after 9pm. It is home to one of the county’s largest employers in Boeing, and is ground zero for the turf war between Wawa and Royal Farms. Start a motorcade of red cop cars, because Ridley, this is yours.