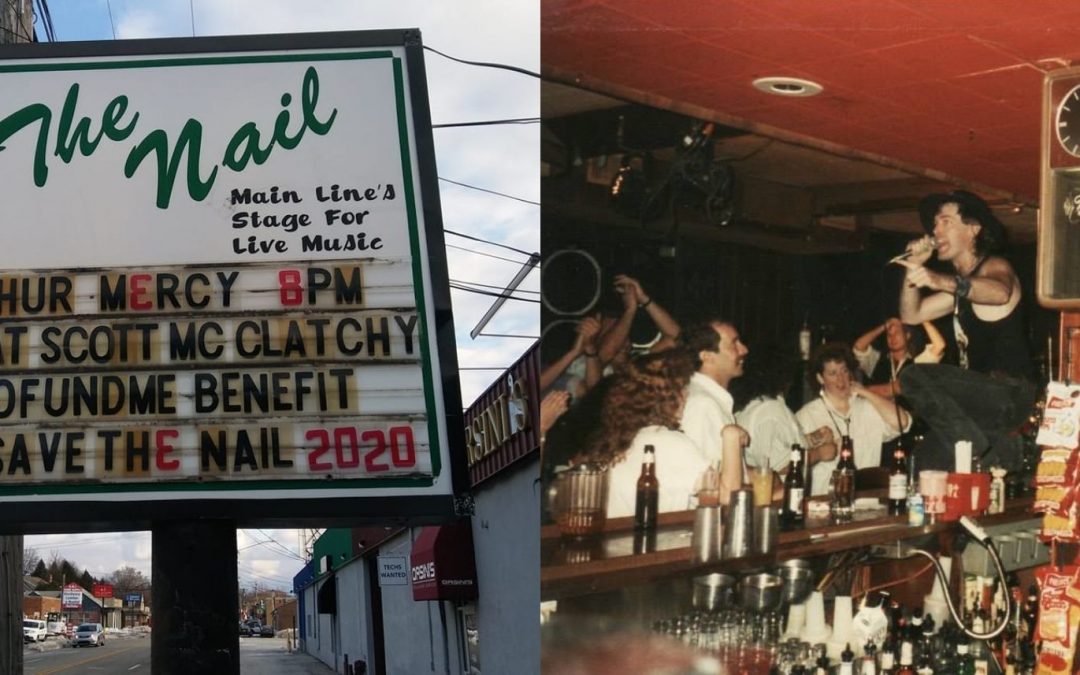 In the last 30+ years, thousands, yes, thousands of local musicians have graced the grayish-green carpeted, plywood-covered stage, gracing the northern wall of 2580 Haverford Road, in Ardmore, PA. What sounds like a Main Line address, is far from once you open the front door. The Rusty Nail is the embodiment of anyone who has truly said the statement “I listen to all kinds of music” because any given night you could see a bill featuring a young punk band, an aging hair metal band, a stoner jam band, a classically trained violinist, a rich suburbanite rap battle, or even a luchador masked surf rock band. Each of these acts, their friends, families, and yes, some even have fans, clog the coveted AstroTurf colored floor to rock out, get tinnitus from the infamous sound system, and slam down some drinks from the legitimately impressive array of beers, shots, and mixed drinks available. For all this and more we need to SAVE THE NAIL! (Don’t forget their retro website site)

Like most things in this country, it came to a Blue Route rush-hour style halt in March. With the outbreak of COVID-19, restrictions placed on small businesses, and limits to the size of public gatherings, this created a three-headed Hyrda that the Little Venue that Could, just wasn’t ready to battle. While all small businesses, primarily bars and restaurants, took a tremendous hit in 2020, The Rusty Nail took a roundhouse kick to the schnozz, as they cannot mitigate their loss of income by offering take out local music, DoorDashing audiences, or selling atmosphere-to-go in safe plastic cups with a sticker on it. They have been completely financially handcuffed since before St. Patrick’s Day.

The NAIL is Delco

Delco is an extremely real place, for all the best and worst reasons. Most people in this Country when they pick up their first guitar and learn their first riff, want to hear thousands scream as they headline The Linc, or sell out 8 consecutive nights at Red Rocks. In the 610, there’s a lot of Delco Dreamers that will suffice with spraining their ankle on The Nails hallowed 4-inch riser known as stage left, while hearing the boo’s from a Phillies repeat broadcast on the TVs at the bar between songs. Why? Because that’s real. That’s Delco.

In a society based on different strokes for different folks, The Rusty Nail has held steadfast in providing an alternative and unique option to standard Delco nightlife for three friggin’ decades. People were throwing devil horns up, and running wild on that carpet since before some of us on this show was born. Maybe some of us were even conceived at a Nail show, I don’t know how froggy people’s parents were in the ’80s. Do you ever think of that? I bet you are now. Gross.

Any night in the County (pre-COVID) one can go bump and grind, and chase some skirt on the dancefloor of certain bars trying to be the clubs shown on TV, and try to get lucky behind the dumpster. That wasn’t the only option, for there was an oasis of enjoyment just to the northwest? (bad with directions) where you had the chance to see 3-5 local or traveling acts that would play their hearts out, cranking out ten times better tunes than anything you will hear on an iHeartRadio or Beasley Media Group owned station, all for the love of doing it, and doing it with friends, new or old. If a pitcher in the MLB consistently throws only fastballs, they will become predictable, stale, and lit up. The Rusty Nail is the Cole Hamels circle-change-up that this area needs to complement its selection of entertainment.

At any given time, you could learn how much champagne in the eye stings, chug three Twisted Teas duct-taped to each other, break out the “Macarena” dance in the middle of hardcore bands mosh pit, get hand-stuff from a recent divorcée, get your car stolen by a crackhead from the Septa lot, I know these are sounding pretty specific right? (that one was my fault) Get a black eye from getting pegged with a Tootsie Roll, get in a wrestling match while wearing bicycle shorts and guyliner, find out that silly string is flammable (who knew), getting pelted with glow sticks, and win a game of pool… all while running up a bar tab a fraction of anywhere else you’d go. These are memories, people, and nowhere is better at creating memories than The Rusty Nail.

That grayish-green carpet had made more stars than any red carpet in Hollywood, even if it was for just one night. The Rusty Nail has created numerous Cinderella stories for this area, but the countdown to midnight is getting closer for it as a business. Buy these damn shirts. ALL, and we mean ALL profit after cost goes directly to The Nail. Why is the shirt white? So that half these local musicians can finally have a shirt that isn’t a black band tee. It’s called diversifying your wardrobe, you just can’t wear it after Labor Day. Before I was a terrible podcast host and apparently terrible article writer, I was a terrible musician. I played in many cities, dozens of different venues, hundreds of events, and I can vouch that The Rusty Nail is an absolute one of a kind institution and landmark, and if we lose it, we will never see anything like it again.

So buy a shirt and Save the Nail! Help DelcoTees.com and Delco Live help save the NAIL.