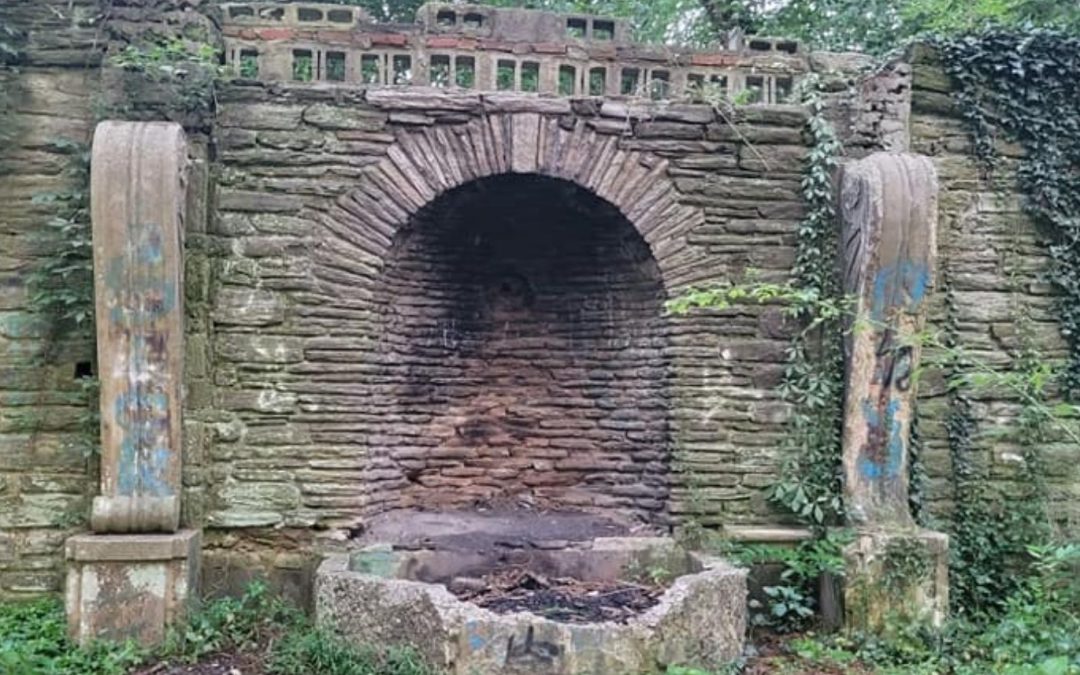 I took a recent look at the Crum Creek Ruins. You will find the story behind these ruins fascinating and worth sharing. Many know this as the Crum Creek Ruins. Though it is also known as Hinkson’s Water Garden. The water garden is all that remains of what was once a very large suburban estate. The construction of the Blue Route wiped out most of it, but a small gated fountain still stands, shrouded in overgrown foliage and surrounded by crumbling stone.

Before They Were Ruins

Looking at them you never know these ruins were part of someone’s backyard. Ward Hinkson was a college man, born in 1895 in nearby Ridley Park to a family with deep roots in the area. In 1764, his family settled at what is now called Hinkson’s Corners in Nether Providence. Generations later, Ward studied at the University of Pennsylvania and went on to pursue a law degree at Harvard. He served in the army and advanced to captain before returning to his home to join the Delaware County Bar. After passing the bar, Hinkson bought a large house and its bare gardens, renaming it Oak Knoll.

The house was set on a long driveway behind a stone pillared gate. Ornately carved blocks of grey stone parted to three floors of tall windows and a high, peaked roof. Photos show a dark wood staircase rising from the red carpet in the entry hall. With your hand trailing on a carved banister, you might walk up the stairs to the overhanging indoor balcony, where floor-to-ceiling windows draped in chiffon cast light onto a crystal chandelier. Pulling aside the curtains, you could see the whole property unfolding below. Azalea, magnolia, boxwood — with the help of his gardener, Ward Hinkson had transformed the property. The gardens bloomed.

The fountains glowed with underwater light. Symmetrical hedges swirled in classical shapes like pastries, opening to a birdbath at the center of the maze. Two pines loomed over the yard, their shadows stretching over the hedges to graze the edge of the bright swimming pool, beyond which a long green lawn sloped down the bank of the Crum Creek. Just below the lawn, the Italian Water Garden was nestled into the bank of the creek.

This is the spot we know today as the Ruins. The lacy foundation in the center of the garden was then a low fountain, with a tall, graceful statue on a pedestal in the center. Rendered in dark metal, a girl stood on tiptoe, pouring water over herself into the scalloped base. Today, the summer foliage almost completely obscures the foundation. Pulling aside tangled vines, it’s difficult to imagine the original form of the fountain. In a domed space in the now charcoal-blackened statuary, another figure stood in the shade, pouring water into the small pool below.

The raucous ivy that has now taken over half the garden then climbed only just to the top of the wall. The lighting ran along the sides of the lush green lawn and through the fountain, casting a gentle evening glow. In the spring, the magnolia that still hangs over the garden today would have dropped its petals into the pool. Rhododendrons, daffodils, tulips, and roses.

Despite a flourishing law career, Ward’s real passion was for flowers, especially orchids. After marrying his wife Edith, a young pianist from Boston’s North Shore, the two began construction on their first greenhouse. This connected to the corner of the mansion on the border of the formal gardens. They began cultivating orchids, eventually expanding to five greenhouses producing flowers for commercial sale. As the couple grew older, the orchids began to take over the corners of their lives. They focused on a special variety, with miniature blossoms that grew close to the stem. Edith would select these tiny orchids from the greenhouses and float them in fingerbowls at their frequent summer dinner parties.

The Princess of Sweden in Delco

On her tour of the Americas, Princess Cristina of Sweden visited the Hinkson home, likely dipping her fingers in the fragrant bowls as she walked through the luxurious space. Shortly after Edith’s children went off to college at Dickinson and the University of Pennsylvania, she fell ill. She died in the fall of 1957, holding her son’s hand in her armchair. Grieving the loss of his wife, Ward continued practicing law and redoubled his commitment to the flowers. Eventually, people from all over the state bought his orchids. They were advertised as gifts for Mother’s Day and as decor for special occasions.

The Blue Route Ruined Everything

The Delaware County Daily Times predicted that “thousands of June brides will walk down the aisle carrying bouquets of his white Phaiaen orchids.” The flowers he grew were in the hands and homes of families throughout the county. That was in 1965. Just a few years later, the family was forced to leave the property. By the 1980s, the home and the greenhouses were gone, replaced with the construction of a four-lane highway, today known as the Blue Route.

Ward Hinkson was still living in the home when the government informed him that the home would be razed. Hinkson fought bitterly to save the estate, employing all his professional and community influence to reroute the controversial highway away from his home. But in the end, the property was destroyed. Ward stood by with his young granddaughter, Jane, as wrecking crews tore down the home and the gardens. “It was heartbreaking,” she said.

Ward died a few years later in a home a few blocks away. Today, wandering up the warped staircase in the woods, you might catch the scent of the cherries and magnolias that shade the garden. And you might notice the dark blooms of chocolate vine climbing wild up the walls. But you will not find any orchids. You will not hear the sound of water trickling. Most likely, you will hear only the buzz of the highway rushing a hundred feet away. The Crum Creek Ruins are best accessed by following the Leiper-Smedley trail, which begins just beyond Mary Lyon. Follow the paved trail until you see a row of cinder blocks on the wooded side of the trail. For more Delco history click here.